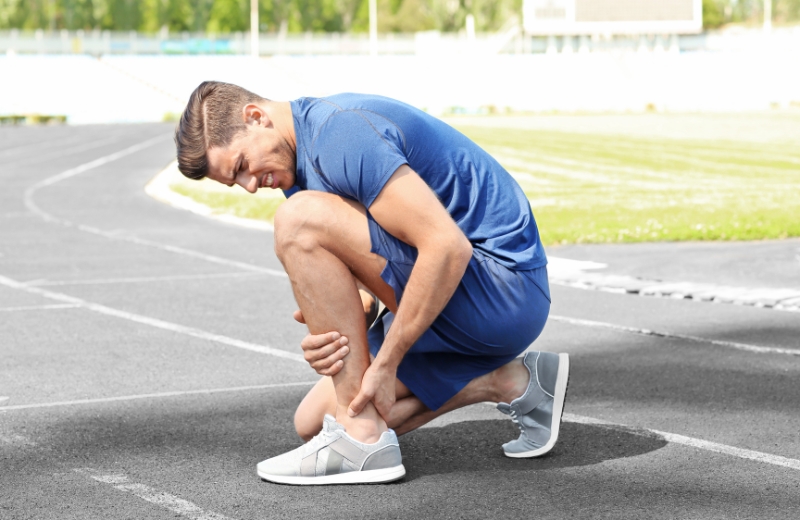 Cause of cramps still not clearly established

Exercise-associated muscle cramps (EAMC) are a common condition defined as skeletal muscle cramps that occur during or shortly after exercise. Typical signs of EAMC include acute pain, stiffness, visible knotting of the muscle, and possible soreness lasting for several days, which can affect an athlete’s ability to perform. Though the clinical presentation of EAMC is easily recognized, the exact cause of such cramps remains unresolved and controversial. In approaching EAMC, those studying it feel that a better understanding of the underlying mechanisms that cause it to occur can allow for better prevention and treatment. Traditional belief attributes exercise in hot and humid conditions to be responsible, while newer evidence suggests a neuromuscular cause. This variability in belief systems has created a number of different prevention/treatment approaches, and the need for a more cohesive strategy is clear. Noting this, a comprehensive guide was created that analyzed theories on EAMC causes and sought to deliver better prevention and treatment tips.

The two main schools of thought on EAMC are the dehydration-electrolyte imbalance theory and neuromuscular theory. The former, and most common among health professionals, says that because the body doesn’t store enough water for exercise and certain athletes don’t ingest enough water to replace the amounts they lose during exercise, EAMC are the result of fluid and electrolyte depletion. Furthermore, exercise in hot and humid conditions exacerbates the amount of fluid and electrolytes lost, which facilitates cramps. There is legitimate research classified at level 4 and 5 evidence (case series and expert opinions) to support this theory, however, it fails to address why athletes competing in cool, temperature-controlled environments still experience cramps. Therefore, while EAMC may be more likely to occur in a hot and humid environment, it’s not necessary for them. Treatment using this concept also shows the theory somewhat flawed: if EAMC were due entirely to dehydration, then fluid replacement would cure it, yet a study showed that even when carbohydrate-electrolyte fluids were ingested at a rate that matched sweat loss, EAMC still occurred in 69% of athletes.

The neuromuscular theory claims that muscle overload and neuromuscular fatigue cause an imbalance between excitatory impulses from muscle spindles (a sensory end organ) and inhibitory impulses from Golgi tendon organs (GTOs- sensory nerve endings). These localized EAMC tend to occur when the muscle is contracting, where the reduced tension in the muscle tendon predisposes the muscle to cramp from the imbalance between excitatory and inhibitory drives to the alpha motor neuron. The enhanced excitability at the spinal level results in an increase in alpha motor neuron discharge to muscle fibers and produces a localized muscle cramp. Research supporting this theory is stronger than that for the dehydration-electrolyte imbalance at levels 3-5, including systematic reviews of case-control studies, but still has flaws. The main problem is that neuromuscular fatigue was found to occur in animals with stimulation at high frequencies (>100 Hz), but normal human muscle frequencies are usually lower than 30 Hz, which means it’s unclear if human muscles become stimulated enough in physical activity to reach levels of fatigue that would bring about EAMC. Based off these and other inherent issues with each theory, it seems fair to conclude that because EAMC occur in a variety of situations, environmental conditions and populations, it is unlikely that a single factor is responsible for causing them directly. It’s more likely that EAMC are due to a combination of factors that simultaneously occur under specific physiological circumstances in each athlete.

Treatment and prevention for EAMC

Pushing anecdotal and unsupported treatments to the side and assuming that a relationship between dehydration-electrolyte imbalance and EAMC exists, professionals recommend that athletes prone to muscle cramping add 0.3-0.7 g/L of salt to their drinks to avoid muscle cramps. Stretching, quinine and beta-blockers have stronger levels of evidence (levels 2 and 3) to support their use; however, the most common treatment prescribed is stretching, which has proven to be effective for EAMC and other types of cramps. In regards to a preventative strategy, despite the lack of direct evidence, maintaining hydration and adequate electrolyte levels is strongly suggested. Monitoring an athlete’s body weight is an easy method of ensuring adequate fluid replacement and individualizes each athlete’s fluid needs. It can be said that an athlete who ingests a liter of water or hypotonic sports drink at least one hour before competition can be confident the majority of the fluid, electrolytes and nutrients have been absorbed and are available in the body. A balanced diet is also promoted, as are performance exercises that target the neuromuscular system and prevention exercises that target muscle spindle and GTO receptors. Plyometric exercises and endurance training are thought to be helpful in delaying neuromuscular fatigue. The current state of knowledge, therefore, cannot answer the question in full, but can help provide a strategy to manage this bothersome and limiting condition.

-As reported in the July/August ’10 edition of Sports Health