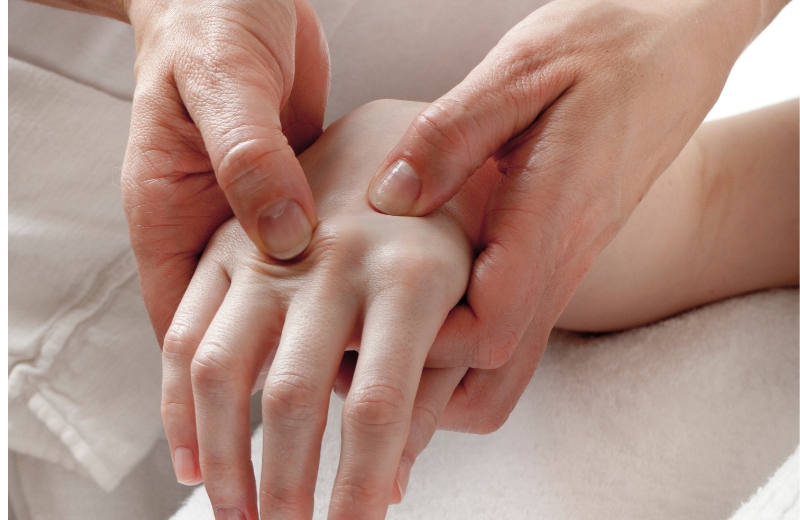 The carpal tunnel is a space at the base of the palm that contains several tendons and the median nerve, which provides sensation to most of our fingers. If these tendons and soft tissue thicken or any other swelling occurs in the area, the tunnel narrows, which puts pressure on the median nerve and leads to carpal tunnel syndrome. Symptoms usually start with a burning or tingling sensation, but eventually pain, weakness, and/or numbness develop in the hand and wrist, and then radiate up the arm. As carpal tunnel syndrome progresses, symptoms usually get worse when holding certain items, and the weakness and numbness may occur more frequently if pressure on the nerve persists.

Carpal tunnel syndrome affects about 5% of the population, and the greatest risk factor is performing any task that requires repetitive hand motions, awkward hand positions, strong gripping, mechanical stress on the palms, or vibration. Although office work and repetitive typing may be a potential cause, the professions most frequently associated with carpal tunnel syndrome are those that involve sewing, baking, cleaning, and assembly‐line work.

Over 100 women are assessed over four‐year period

To shed light on this topic, a study was conducted that compared the long‐term effectiveness of surgery to manual therapy, a conservative intervention frequently used by physical therapists. The study was a continuation of a randomized‐controlled trial in which 120 women with carpal tunnel syndrome were randomly assigned to undergo either manual therapy or surgery and then followed up for four years.

Patients assigned to the manual therapy group received one 30‐minute treatment session per week for three weeks. The session consisted of the therapist performing a series of mobilization techniques with their hands that targeted sites that could potentially trap the median nerve, as well as tendon gliding exercises and mobilization techniques to the upper spine. Patients in the surgery group underwent a surgical procedure called carpal tunnel release and were then educated on how to perform the same exercises as the manual therapy group. All patients were assessed for the level of hand pain before the study began and then periodically for the next four years.

Of the 120 original participants, 97 (81%) completed the four‐year follow‐up. In the original trial patients in the manual therapy group reported greater decreases in pain intensity than the surgery group at 1, 3, and 6 months. At the one‐year and four‐year follow‐up, there were no significant differences between the manual therapy and surgery group. There were also no significant differences between groups in the rate of surgery over four years, and patient’s self‐reported scores on their perceived improvements were similar as well.

These results suggest that surgery and manual therapy lead to similar outcomes over four years for women with carpal tunnel syndrome. It is therefore advised that patients with carpal tunnel syndrome first attempt a trial of conservative treatment that includes interventions like manual therapy before considering surgery, which runs counter to the current trend of most patients receiving surgery. Patients should also be aware that surgery is typically associated with greater costs and potential risks, whereas physical therapy is universally regarded as a safe and effective treatment with minimal risks.

In our next post, we summarize a study that reviewed the most effective physical therapy interventions for tennis elbow.